If you get bored of walking the local trails, know that all parts of the world have unique hikes with fantastic views and / or a particularly high level of difficulty.

Do you have dreams in the drawer? Big ideas that can’t be realized on nearby trails? Are you reckless and want to overcome your physical and mental limits? If so, we’ve compiled a list of the world’s most dangerous hikes for you.

It is time to be brave, put on trekking equipment and enjoy these protected areas where nature is mistress and man passes only if he brings a significant amount of courage with him. Get ready, the top 3 on this list will give you goosebumps! 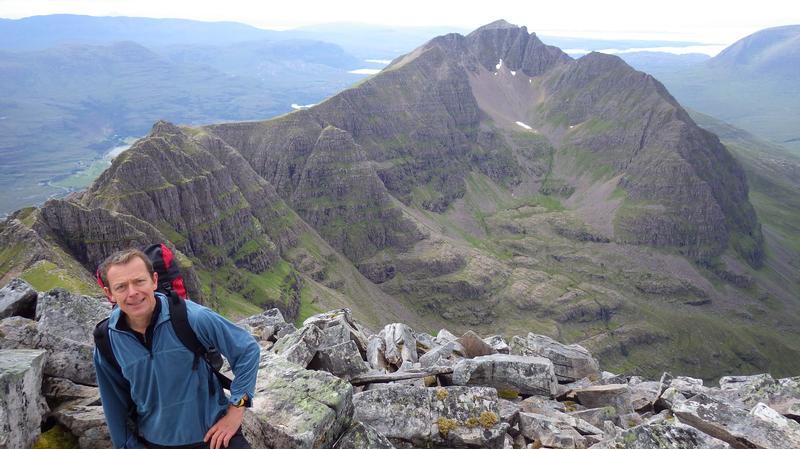 Seventh Heaven in Scotland. If the country isn’t famous for its high mountain ranges, don’t forget it’s still home to the mountain massif. One of the most famous peaks is Liathach, a mountain located in the Torridon Highlands.

This peak, which is about 1,055 meters above sea level, is considered by some climbers to be one of the most spectacular peaks in the country. The terrain is very steep, no less steep, and has many slippery stones, which makes climbing even more difficult.

The ridge line is not too wide which gives a real sense of grandeur and elevation. As the climb is complex and dizzying, do not hesitate to ask for a guide specialized in this mountain.

#9 – Amphitheater (South Africa), one of the steepest peaks in the world 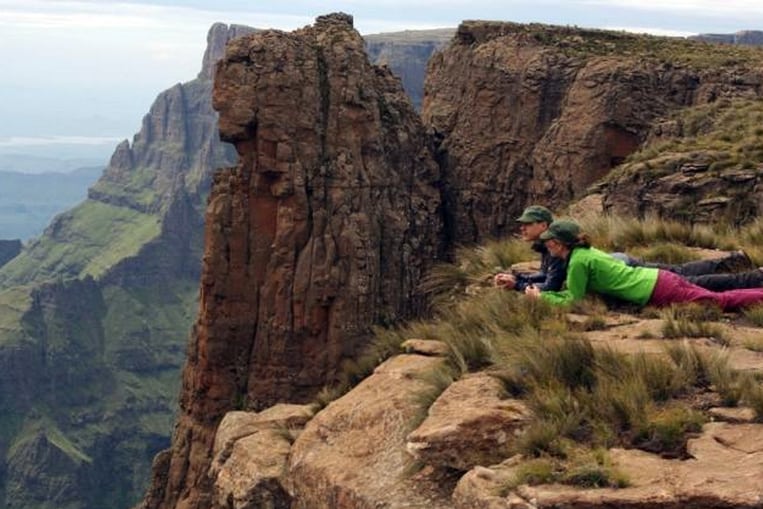 If you’re planning on getting some fresh air, you’ve probably come to the right place. Here we are not offering you a helicopter tour, but a climb to one of the steepest and most impressive peaks in the world. It is located in South Africa, precisely north of the Dragon, a mountain range in southern Africa, in the eastern part of the country.

This rock formation enjoys one of the most breathtaking views in the world once you reach the top. But to enjoy it, you will have to resist a tour, famous for its difficulties and beautiful nature. The amphitheater with its very wide cliff is over 5 kilometers long and rises to a height of over 3050 meters.

The climbing complexity will be partially offset by the view of the Tugela River Falls, the second tallest waterfall in the world behind Salto Angel Falls, which falls approximately 950 meters from the cliff top. Wanderers, especially experienced ones, will be in Heaven.

To make it even more difficult, metal ladders are installed along the cliff at the most inaccessible points. We will not lie to you: it is not recommended to be afraid of heights! 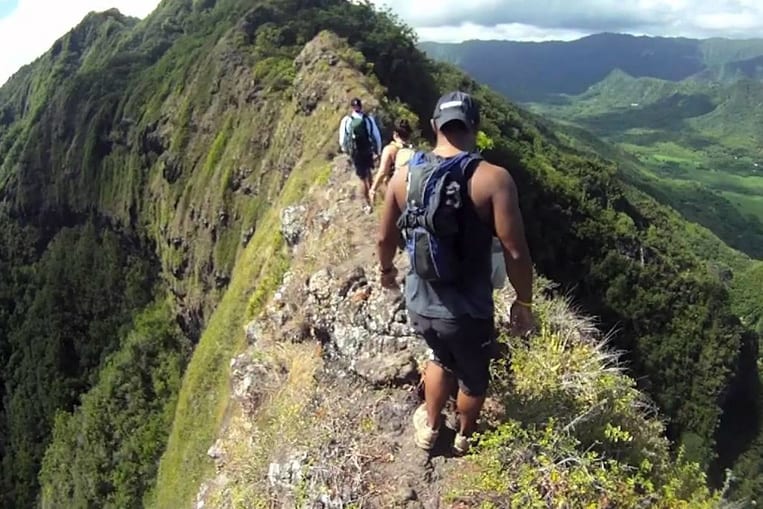 This is not an attraction set in a famous park, but one of the hardest travels in the world.

Pu’u Manamana is located in Hawaii near Hauula. Named after the Pu’u Manamana Turnover Trail, this trail forms a loop on the eastern side of Hawaii for over 6.5 kilometers.

There are many ridges along the way which will put a strain on you as the peak is around 2,000 meters high, with impressive gaps. 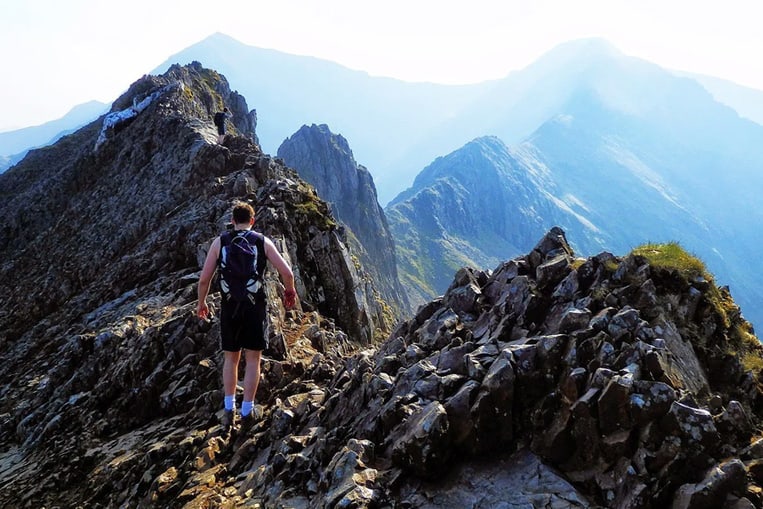 Don’t be fooled, Wales has its own mountain range. It also hosts one of the most inaccessible peaks in the world, with breathtaking and difficult to access views.

The trail, called Crib Goch Goch, literally “red ridge” in Welsh, is part of the Snowdon massif. With a sharp ridge on the western face of the massif, known as Garnedd Ugain, culminating at 923 meters above sea level, traversing this rocky mound is considered one of the most extraordinary hiking experiences in the world.

The difficulty of the trail will delight lovers of extreme excursions, with a breathtaking panoramic view of the summit. But before enjoying the view, grab your best gear and notice the different edges, sharp as knives!

More than one climber has already stopped, even the most experienced. Using a guide as a companion may not be a luxury. 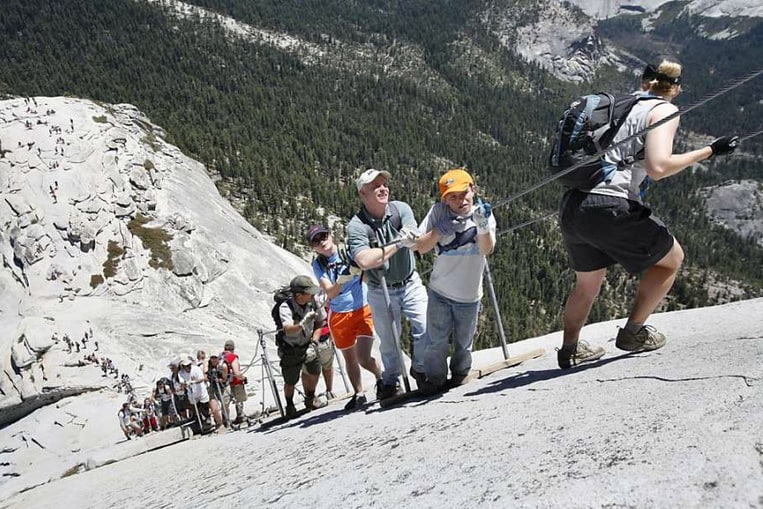 That’s it, you’ve decided to bring your tickets to the United States. You won’t be able to resist the lure of the great outdoors across the Atlantic, and here you will go to one of the most diverse countries in the world. And this diversity can be found in the hidden treasures of some countries, especially Western countries.

California is no exception to the rule. It offers an unrivaled playground for adventurers and experienced hikers, has exceptional views, and offers popular hiking trails.

This is especially true in Yosemite National Park. Among the peaks of this national park is the Mezza Cupola, the mountain that makes hikers dream. This cliff rises 1,440 meters above the valley below, which is already more than 1,200 meters high! Its peak will give you strong impressions.

Contrary to appearances, know that this rock can be overcome without sports equipment. A good dose of courage and shoes suitable for the rock will allow you to tame the beast. Many people are in a hurry in the season to reach the top of this monster. 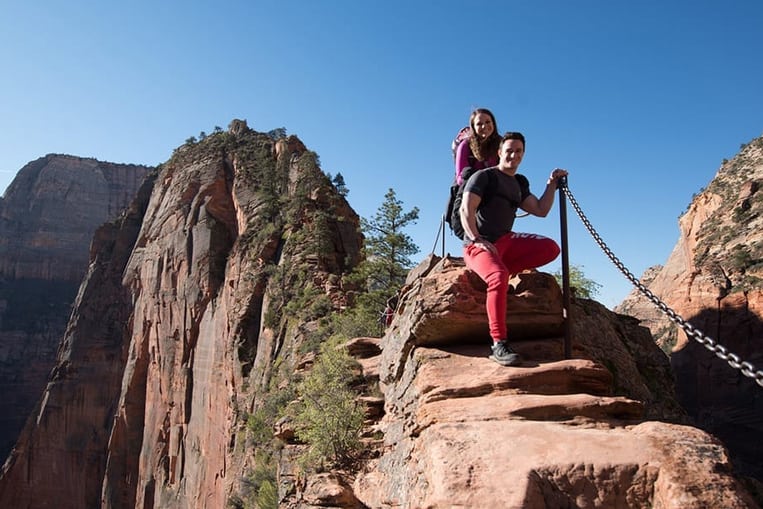 Ever since you toured America and just climbed the terrifying Half Dome, you’ve always been looking for the destination of your next trip. One of the most suggestive trails in the United States is located in Utah, precisely in the southwestern part of the state, and is called the Path of the Angels. This peak, which reaches 1,763 meters above sea level, is part of the Zion National Park, majestic for its cliffs and imposing peaks. Angel Landings is therefore one of those paths that arouse curiosity, but also cause chills. To get to the top of the mountain you have to travel no less than 8 kilometers with a positive difference in height of 453 meters. All this in a sumptuous, but equally dangerous setting, when literally walking along the ridge line,

We agree that dizziness is not recommended here. However, after swallowing the path, you will be mesmerized by the beauty of the view from the top. In fact, you will find yourself at the top of the center of a protected national park. 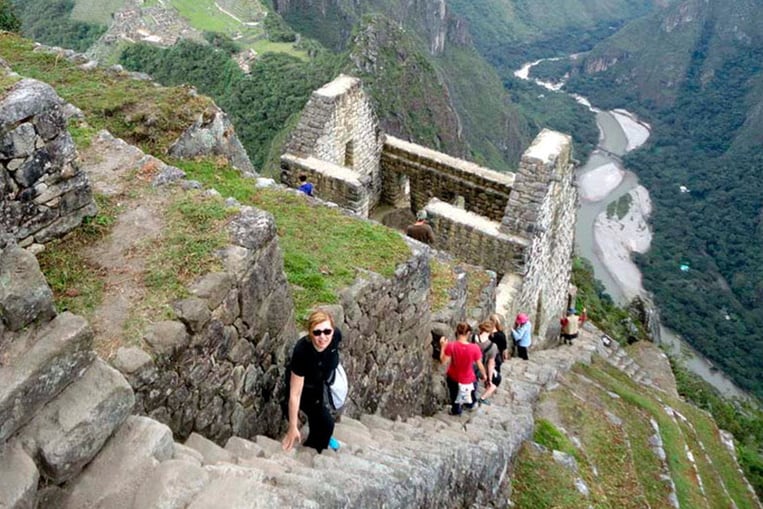 Who hasn’t dreamed of climbing the stairs of Machu Picchu in Peru? For an experienced hiker, this is a guarantee of magnificent landscapes and recognized trails. Located on the same site as the famous Inca city, Huayna Picchu is located on the eastern side of the Andes.

Separated from Machu, the viewpoint is located at a height of approximately 2720 meters, 360 meters above the mountainous city. Access is restricted for security reasons and to preserve the delicate environment. 400 people are allowed per day.

So plan your arrival along the river. The traps are just starting. Because to cross Machu Picchu, you will have to climb the side of the mountain, without handrails, with a void that will make your head spin. The steps, 1 to 2 meters wide, are flanked by protruding ridges.

If you still doubt the dangers of travel, it is not uncommon to see newcomers feel uncomfortable about the size of the void. 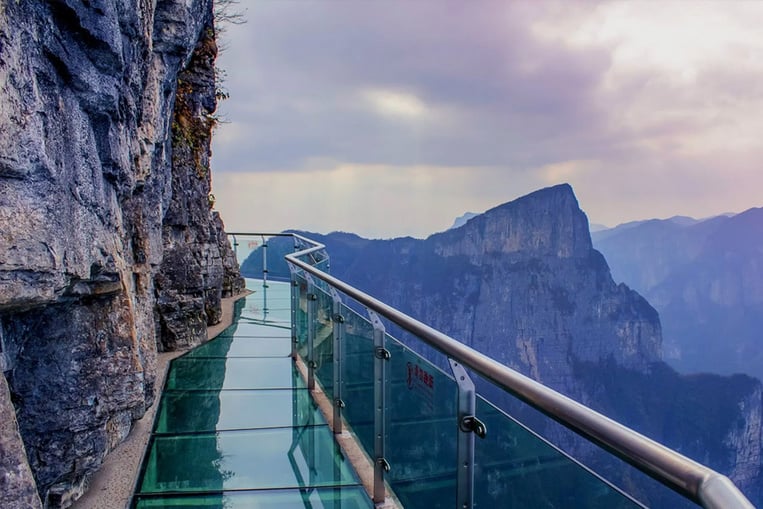 Thrill seekers, you are in the right place. In Northwest China, Hunan is a unique place, both in appearance and appearance. Tianmen Mountain is home to a special place called the TianMen Skywalk, a glass path 1,220 meters above the void.

A glazed walkway has been installed that allows even the most fearless tourists to challenge their mental limits and the perception of emptiness. Approximately 2.5 cm thick and 2.5 meters wide, the walkway has a clear glass floor that makes you appreciate modern engineering.

Sensitive people should definitely not look down. If you’ve managed to curb the vertigo, you’ll eventually reach the steps of the Gates of Paradise, sometimes regarded by experienced hikers as one of the most dangerous routes in the world. 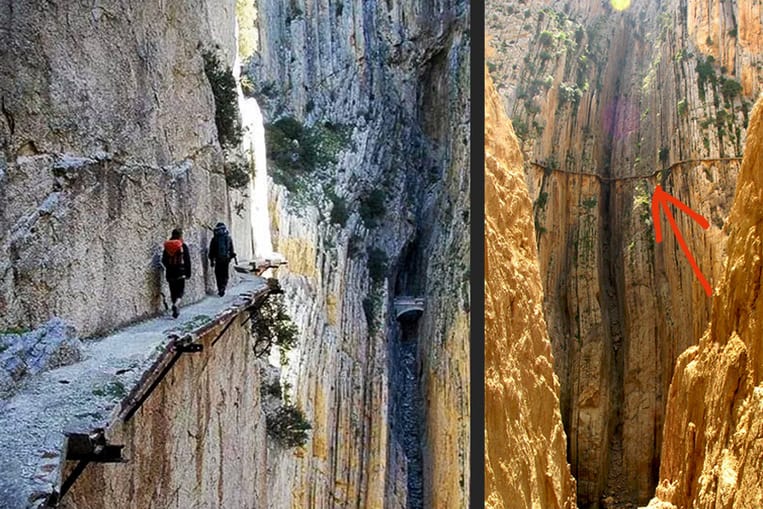 Do you want to test your mental resources without going to the other side of the world? All the better, we have prepared a Dante program for you just a few hours from home.

In the south of Spain, near Malaga, in the Los Ardales Natural Park, there is a path about 3 kilometers long, built between 1901 and 1905, which initially connects two hydroelectric dams.

A path that is only 1 meter wide is often considered the most dangerous in the world as it is also completely on rock. So famous for its danger it was closed in 2000 by the Andalusian government.

Now, years later, it has been reopened to the bravest who dare to challenge hundreds of meters of emptiness under their feet. It is also accessible to families. It is a large playground to play along the imposing cliff that leaves no room for surprises.

Even experienced climbers are among the most faithful practitioners of this route. During the renovation, metal bars were also installed, thanks to which it is possible to hang over a hundred meters of empty space, and only the rope can guarantee. We won’t lie to you, it’s pretty scary. 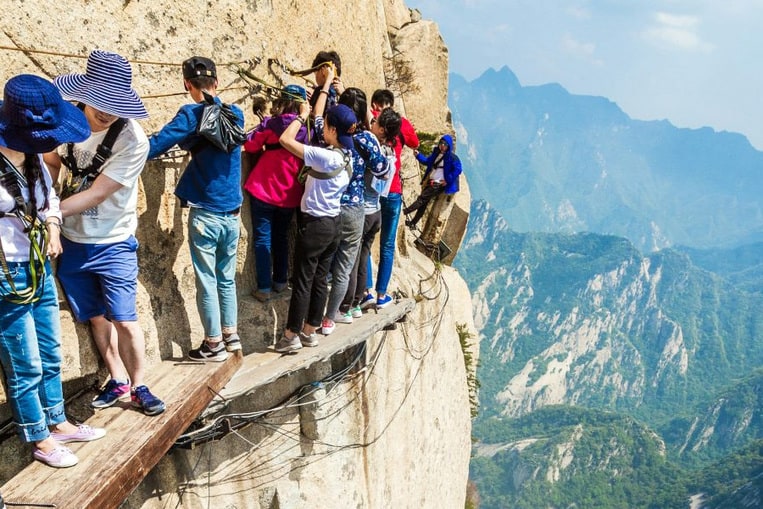 Two wooden planks about 40 cm wide and 2,200 meters high. It’s an explosive cocktail of hiking that awaits you if you head to the slope of Mount Hua Shan and want to reach its summit.

At the beginning of the climb, wooden ladders are mounted on the slope of the mountain to lift the legs. Sporting progress already. The next part is even more challenging, with randomly trimmed boards, non-academic stacked and nailed down, all with a few hundred feet of empty space underfoot.

Also, not to reassure you, every year there are several fatal accidents, the place is truly remarkable for its insecurity. The tour also turns into a via ferrata when you have to attach yourself to a chain and climb a step carved in stone that is no wider than the toe of your shoe.

According to Chinese legend, reaching the top means finding immortality, as the temple dominates at the end of this journey. If you come to the end of this Via Crucis, hopefully you will find a recipe for eternal life and you will have the strength to go in the opposite direction.